The Joys of Melta

The Fire Dragon recruiting officer has the easiest job in the Craftworld.

Fire Dragon Exarch: "Hey, you wanna be a Fire Dragon?"

Hapless Eldar: "I don't know - I was thinking Dire Avenger..."

"What - the careful art of balanced attack and defense? Yeah, you could do it that way. Or you could just take this fucking meltagun and burn people down with one shot."

"What kind of tactics do you use?" 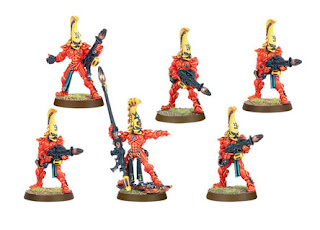 "Every person around you also gets a meltagun."

"Is the training hard?"

And that's really it. A Warrior Aspect built entirely around a gun. Swooping Hawks have to master the subtle art of flying. Howling Banshees practice endlessly with their elegant power swords. Even the Dark Reapers have to be good shots. Dragons just get vomited out of a Wave Serpent within 20 feet of the enemy and start pulling triggers. Fifteen seconds later, there's a burning Land Raider next to five dead Fire Dragons and a Space Marine desperately wondering what the hell just happened. The Autarch, a General of the Eldar people charged with overseeing this ancient civilization - this slowly dying race - sees this and thinks: